As the global economy has slowed over the past several months, Bondora has planned on lower originations to maintain stability through this crisis period, and a positive long-term growth outlook for the future. As a result, originations came in lower in March than the previous month, totaling €9,702,500.

Originations in Spain were least affected on the month, with originations totaling €1,656,664, down by 15.4%. At the same time, Spain also saw its interest rate increase, up to 48.6% in March. While total originations fell in Estonia, the country took a larger share of all Bondora originations, garnering 46.2% or all originations compared to 44.1% last month.

Average loan amounts decrease across the board 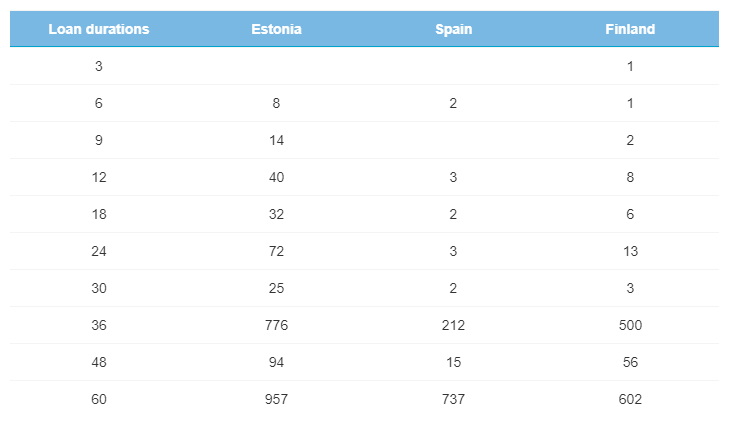 Estonian borrowers trended downward in age, averaging 38-years old, while Finnish borrowers were, on average, older than last month, at 47-years old. Spanish borrowers remained the same at an average of 42-years old.

Incomes for Estonian borrowers rose for the second consecutive month, up by 6.1% to €1,382. Spanish incomes also rose, up by 2.4% to €1,654. However, Finnish borrowers made less money this month than in previous months, averaging €2,545, a decline of 3.7% from February.

In Spain, more borrowers had a high school education (44.7%) in March than last month (41.4%). Otherwise, there was not much change in the education level of Bondora borrowers.

The only category to rise in Estonia were borrowers with a mortgage, accounting for 7.5% of borrowers in the country. Significantly fewer borrowers in Finland were tenants in March (40.9%) than in February (45.9%).

During these times of economic uncertainty, Bondora recognizes the need to maintain financial stability. For this reason, Bondora has slowed its originations to a sustainable level, while still providing investors with solid p2p loan options for their portfolio.