The latest in European economic news

While the Finnish government is confident it can balance its budget by 2023, the International Monetary Fund isn’t so optimistic. “The government plans to make the budget balance by 2023, in large part by boosting employment. But our view of likely growth and employment indicates the government would still have to borrow about 1 percent of GDP in 2023,” said the IMF. Instead of higher economic growth, the IMF forecasts that Finland’s economy will grow by 1.25% in the current year and 1.5% next year, both still below the 1.7% growth of its economy in 2018. In the short-term, the country’s government has avoided a holiday season catastrophe, as it reached an agreement with the nation’s postal service, Posti, to end a recent strike by 10,000 of its employees. The settlement will allow the postal service to get back on track during its busiest time of year.

Spain currently sits with a temporary government, and that’s not ok with the European Commission. The governing body pushed Spain to form a stable government so that it could deal with the country’s increasing levels of debt, and submit a budget plan to the EU. With a debt-to-GDP ratio of close to 100%, Spain is in danger of not meeting the commission’s debt rule. The EU is imploring Spain to reduce its public spending, which has been a main contributor in generating such great debt in the country.

Elsewhere, the Estonian government is expected to raise its contribution to the European Union budget by 2021 to €320 million from its current contribution of €200 million. The main reason for the boost is to make up for the loss of funds stemming from the exit of Britain leaving the group. Estonia will receive less subsidies in certain economic areas, such as agriculture, as its economy is growing faster than expected.

Overall, Bondora return rates declined slightly compared to the previous month. Both 2018 and 2019 return rates remain above their respective targets. 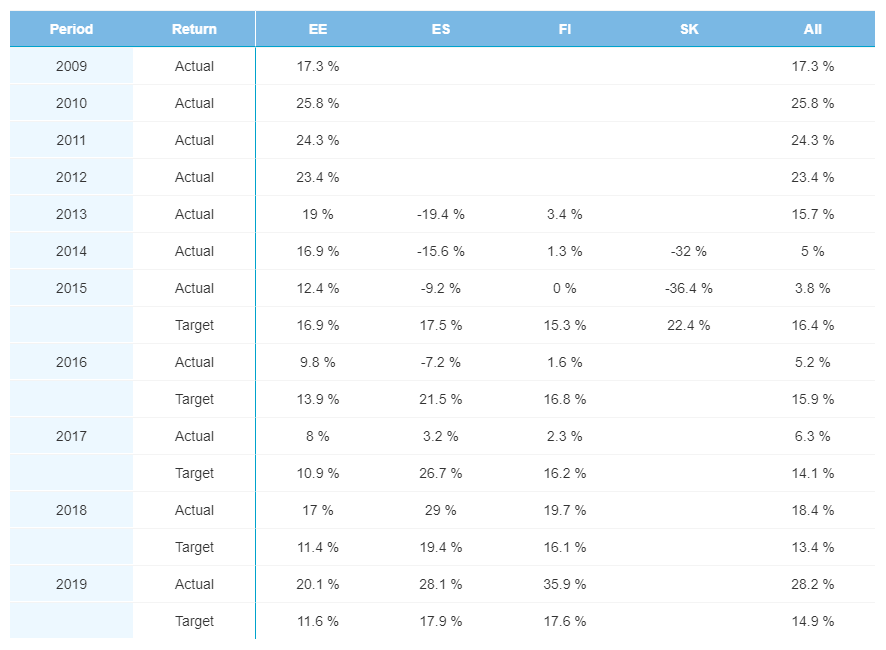 Rates for Q1 2018 fell slightly below their target to 12.3%. Rates for all quarters in the most recent two years dropped, but no rate fell more than 1% on the month. 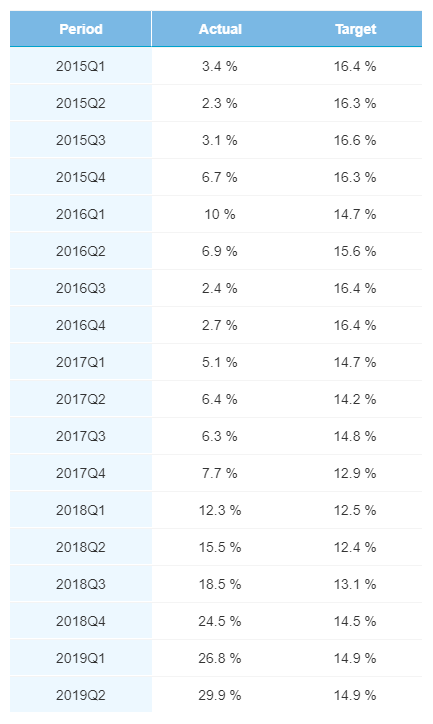 AA rated loans stand at -2.2% for Q2 of 2019, however this is skewed due to a sample of less than 50 loans. Other rating categories with more loan originations maintained returns above their targets. E rated loans were mostly unchanged, coming in at 26.4%. F rated loans maintained the highest return rate of 41.0% in November. 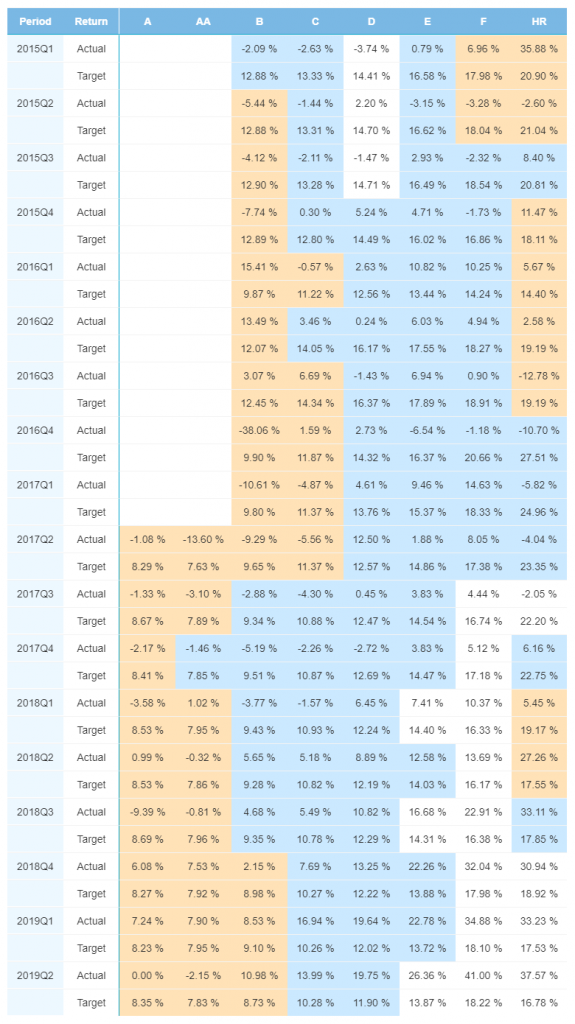 Returns for Estonian B, C, D, and E rated loans all came in above their numbers for October. The biggest gainers were B and C rated loans which both came in 0.1% higher in November. E rated originations maintained the highest return rate, at 28.8%. 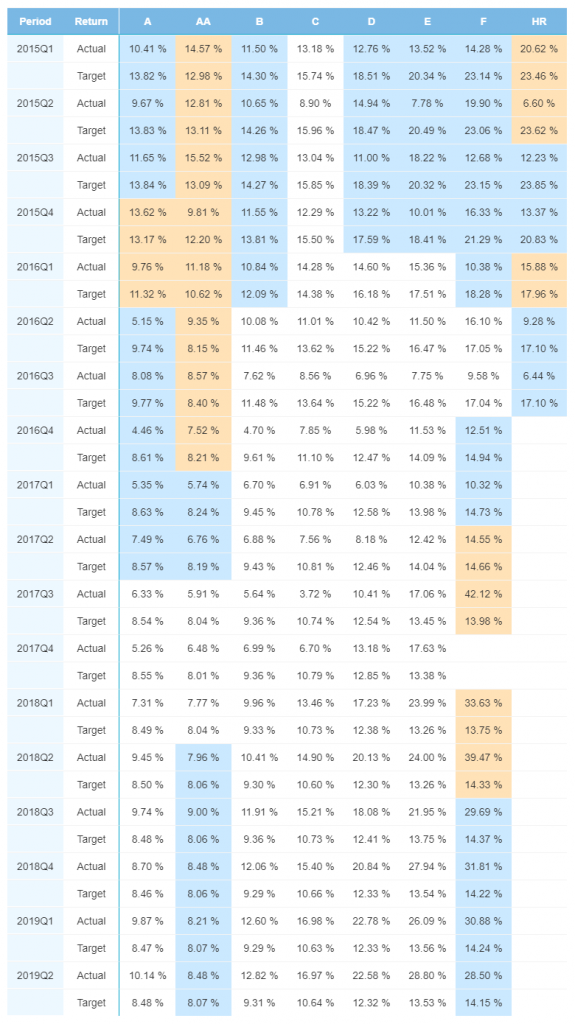 Spanish F rated loans, which comprise the most originations in the country, saw their return rates rise to 36.2%, a gain of 0.2% in November. HR rated loan return fell the most, but were still well above their target, coming in at 55.1%. 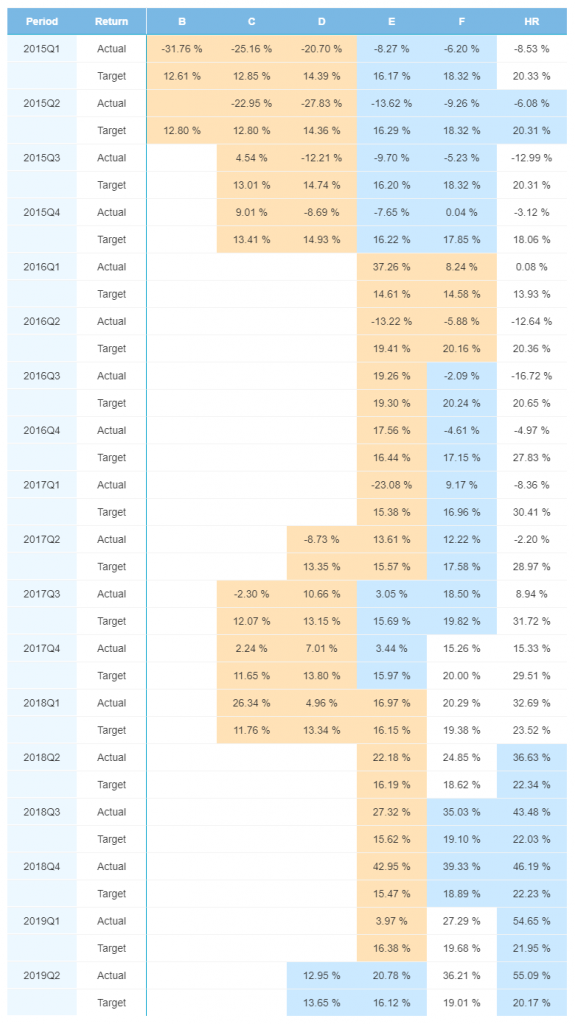